Introduction: Immature myeloid cells (IMCs) are bone marrow-derived cells that normally differentiate into granulocytes, macrophages, and dendritic cells (DCs) but expand in pathological conditions. We have previously shown that IMCs accumulate in the placenta, promote angiogenesis, peak during mid-pregnancy and correlates with neonatal birthweight.

Placental angiogenesis is known to be aberrant in 5-10% of pregnancies leading to intra uterine growth restriction, preeclampsia or other serious pregnancy complications that may lead to maternal and fetal morbidity and mortality.

Study Aim: Our study aimed to investigate IMCs and DCs populations altered in placentas from pregnancies complicated by preeclampsia.

Materials & Methods: Placentas were collected after deliveries from women with pregnancies complicated by preeclampsia (n=8) and normotensive controls (n=12). Placenta samples were enzymatically digested, immunostained and analyzed by flow cytometry. IMCs are defined as CD45+CD33+LIN2−HLADR− cells and DCs are defined as CD45+CD11c+HLADR+ cells (Figure 1). The percentage of IMCs and DCs was calculated of total CD45+ hematopoietic cells in the placenta.

Conclusion: The accumulation of proangiogenic IMCs in placentas from pregnancies complicated by preeclampsia along with the decrease in the presence of DCs, may correspond to the hypoxic effects of impaired angiogenesis and the reduced placental perfusion in preeclampsia. These alterations in myeloid cell presence may help elucidate their role in the pathogenesis of preeclampsia and their relevance to aberrant placentation. Moreover, future quantifying of specific myeloid cells from human pregnancy during chorionic villus sampling, or even their presence in maternal blood samples, may provide information about the risk of developing preeclampsia. 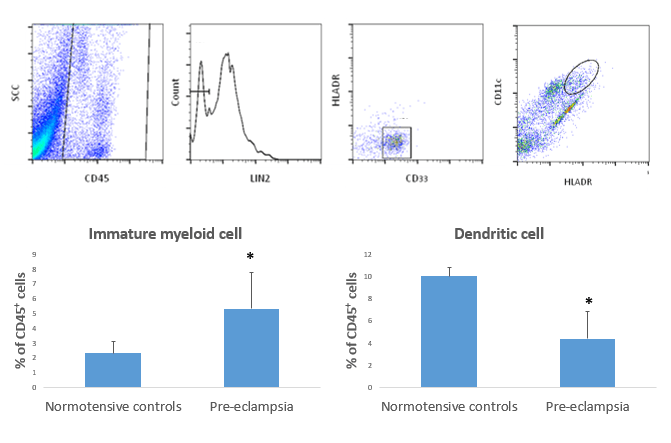